skip to main | skip to sidebar

The month of April has arrived once again here in South Florida. It begins the two month period that I call the blow dry months here at the Sandpit garden. April and May here are consistently hot, dry and windy. Just as a blow drier works the warm winds evaporate all the moisture out of the soil and the lack of rain compounds the drying effects. We are in a drought here now and the government has imposed water restrictions. The next two months will require dedicated watering to keep the garden going until June when the rainy season starts up.

I have started getting away from containers for most of the plants and put them directly in the soil. It keeps them at a more constant moisture and temperature and seems to be working better for me. The containers have their advantages but during this time of year will dry out overnight. With the plants in the ground I can stretch a couple of days between watering's which can save the plants when away from the garden. 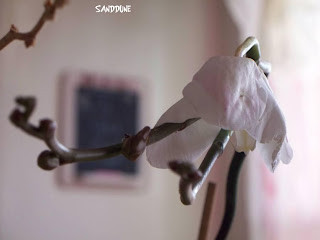 Anyway since we are speaking of Orchids I found this guy stuck in the middle of some other potted plants outside. This phalaenopsis Orchid is trying its best to bloom for me but I was remiss in watering it and it has been getting too much direct sun.

I brought it inside to get some much needed attention, kinda like Orchid CPR. I hope that it soon perks up and the when the buds on the flower stem open they will show its true form. This bloom was just wilted over itself. How do you say Orchid guilt. 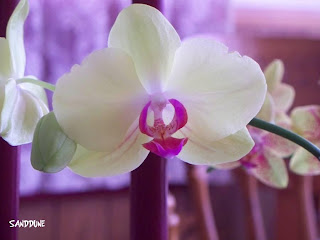 I had last month brought inside some of the other Phalaenopsis Orchids and put them by a window so they get the morning light.

This guy is solid yellow with a tinge of lime surrounding a purple throat. It is quite simple but striking. It has been blooming for over a month now. 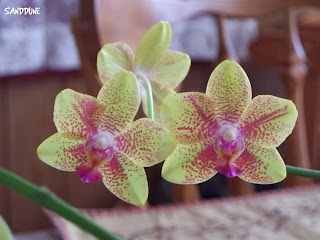 The Phalaenopsis like it inside in the air conditioning seems like. These Orchids like daytime temps between 70 and 80 degrees so they are much like people. During the heat you can bring them inside without worry to enjoy their spectacular bloom. They will get to stay inside while in their bloom cycle then get returned outside to the harsh world that is the Sandpit. Plants here have to be tough .

This Phalaenopsis Orchid has been around the Sandpit now for several years. I call it freckles.

It has smaller blooms than some of the others but is my favorite of the Phals that I have. 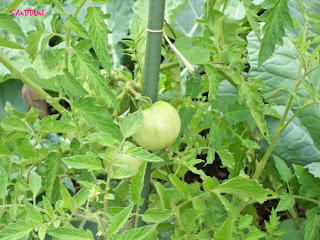 And speaking of the Sandpit raised beds the Jubilee heirloom tomato plants are looking really good. No sign of disease or other Tomato malady's that seem to plague the tomato plants here. I have been feeding them with liquid tea made from the Comfrey leaves. These are yellow tomatoes and so far so good. Of course by writing this I have probably doomed them but they look good for now.

They are growing amongst the Collard plants and both are competing for space. Maybe that is a good thing and the competition makes them grow better.

That's the sitrep for early April here at the Sandpit garden.

Just a reminder that now is the time to plant some Moonflower seeds. It is my unscientific theory that the Moonflower plants will bend Hurricanes away from your home and garden. Even if they don't the plants are super cool opening their white flowers at night. With Hurricane season just a short time away some Moonflower plant seeds will cost you a lot less than what your windstorm damage insurance deductible in Florida is. Urban legion or not I have never been struck by a hurricane when The moon flower plants were growing at the Sandpit. Believe it or not. 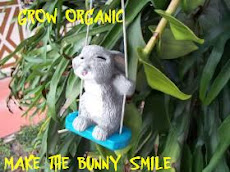 sanddune
Miramar, Florida Zone 10, United States
I am endeavering to transform my urban backyard into a organic sustainable garden. One small step at a time on a very small budget. I learn more each day from people, who unknowingly perhaps, help me on this quest.